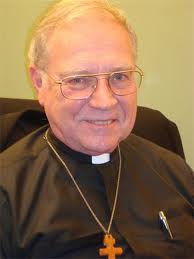 Fr. Giles Spoonhour is the Co-Founder & Spiritual Adviser of the New Seminary, as well as the non-denominational chaplain for the Hudson Valley Hospital Center.

Fr. Giles Spoonhour came early to the interfaith movement even while preparing for priesthood with the Graymoor Friars of the Atonement, a Franciscan community committed to the pursuit of ecumenism. While at Catholic University in Washington D.C. he independently studied Judaism, including corresponding with a Rabbi whose brother would later make Fr. Giles a cornerstone of the first and oldest Interfaith Seminary. After ordination in 1964, he served in various capacities: teaching at Graymoor’s Minor Seminary at Montour Falls, NY and supplying in area parishes as a pastor in British Columbia. After Vatican II, however, seeing changes the Council had proposed being watered down or reverting, Fr. Giles, as many others, left the established Church.

Giles was drawn to the Society of Priests for a Free Ministry, a community of those who had left Rome and sought more inclusive ministry that would focus on practical service to its people, a prophetic foreshadowing of the social justice principle, which now informs ministries of many faiths, and particularly of many interfaith ministers now being called. SPFM’s members commonly functioned independently with small fellowships, which met in members’ homes. They often worked in service vocations such as social services, substance abuse counseling, halfway houses or shelters.

It was through SPFM that he eventually connected with Rev. Jon Mundy, then a Methodist minister, and through Jon that he was introduced to Rabbi Joseph Gelberman. The three, plus Swami Satchitananda, first held the Interfaith Temple at various locations in Manhattan. After a time, discussions turned to Rabbi’s vision of a school where those feeling called to some kind of spiritual life and service, possibly alienated from their own beliefs or without a “home”, might learn about differing paths, and means of connecting to the Divine by service to others. Students were always urged to look again at their own faiths with new eyes and reconnect. Rabbi’s principle was “Never instead of, always in addition to…” Thus the New Seminary was formed.

The New Seminary’s first classes were held in 1980-81. Giles was one of the principals always present and available to students for discussion of subjects of any class, topics on the student’s mind, personal concerns and problems. He also taught on Catholicism, where, some students have recalled with appreciation and surprise, he might offer apology for the grievous way the Church has at times wronged other faiths, other races, women… In the course of the New Seminary’s existence, he has also been a dean, of first year, second year and, when the classification was introduced, of accelerated students. He has presented on Celtic Spirituality, Matthew Fox’s Creation Spirituality, Neale Donald Walsch’s Conversations with God and Ken Wilber’s Integral Spirituality. In the early 2000’s Dr. Michael Festa, CEO of the Interfaith Temple and New Seminary, appointed Giles as Director of the Interfaith Temple. In 2011, at the time of the re-formation of the New Seminary, Giles became a member of the New Seminary Board of Directors. Presently, he is the Spiritual Director of both.

In 2005, Giles was incardinated with the Orthodox Catholic Church of America. He now functions with the parish of St. Mychal Judge in Manhattan, which, though small, counts among its members the clerics of other denominations no longer aligned with the Roman Catholic Church, and emphatically embraces those of non-traditional gender identities or preferences.

After retiring from substance abuse counseling with New York State in 2001, Giles spent a year pursuing CPE through Westchester Medical Center’s chaplaincy program, leaving only to return to counseling full-time, this time with women in the state’s Taconic Correctional Facility. He does not reveal his clerical status, but some of the women state plainly that his influence has helped change their lives. Members of his volunteer fire department, on the other hand, know his religious background. He serves as a chaplain and has presided at members’ funerals or wakes, but has also performed some marriages within the Department. He has performed weddings, as well, for couples with backgrounds as divergent as Buddhist, Hindu or Muslim marrying Jewish, Roman Catholic or un-churched spouses, and given blessings in various tongues for the families’ sakes. He also recently became a non-denominational chaplain at Hudson Valley Hospital Center.

Rev. Jenellen Fisher
Blessing Us With Her Voice